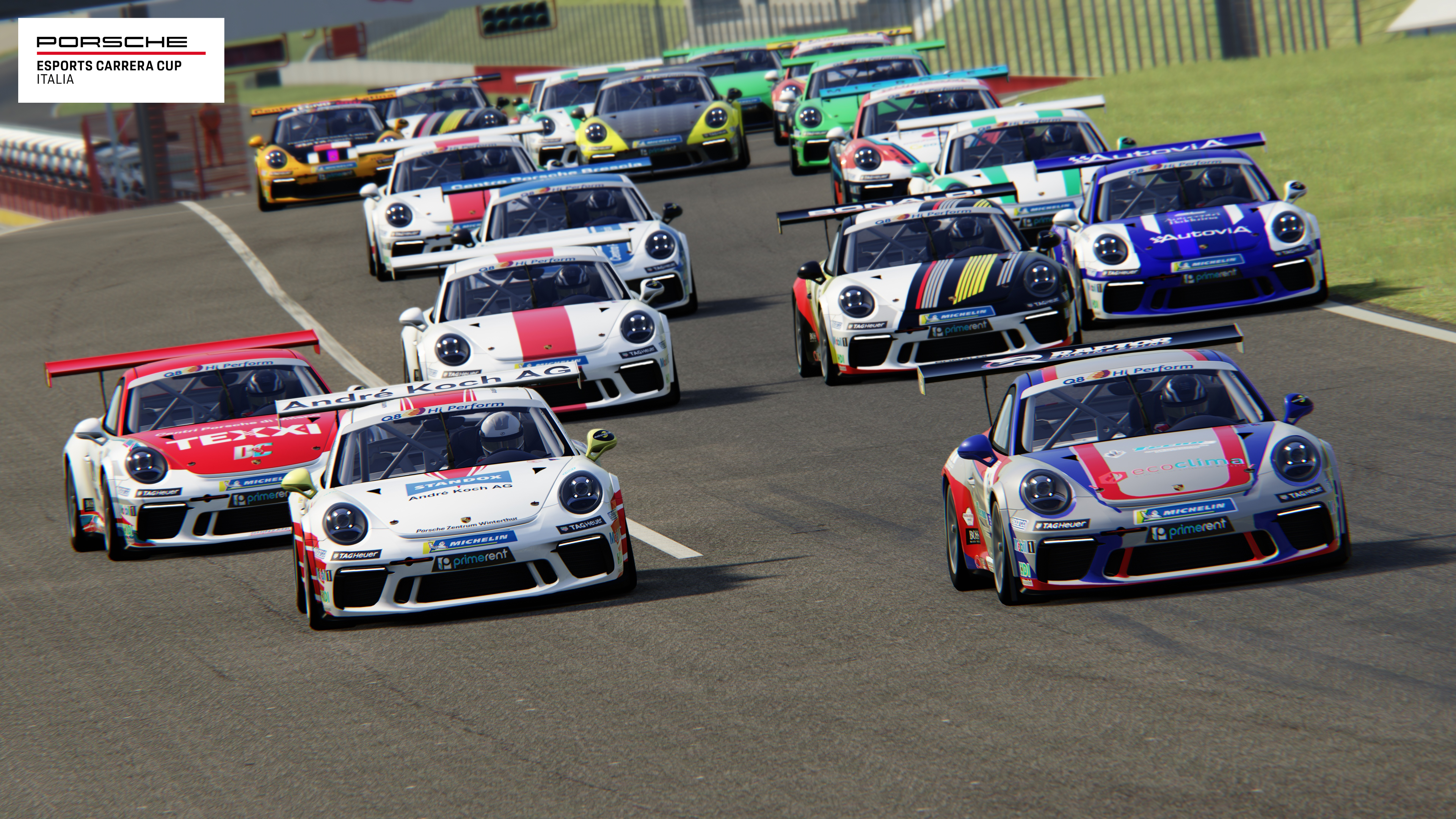 Following up on the great success of the Sky Italy broadcasted Porsche Prologue event; the 2020 season of the Porsche Esports Carrera Cup Italy presented by Q8 Hi Perform and organised by Porsche Italia and AK Esports has just started the virtual engines.

Based on Assetto Corsa, the popular sim racing game developed by Kunos Simulazioni, the new Esports championship has been renewed with an interesting change of format that will combine virtual talents with very fast Porsche Carrera Cup Italy real drivers. Among these there are famous drivers such as Simone Iaquinta, winner of the Porsche Carrera Cup Italy 2020 edition, Leonardo Caglioni, Alberto Cerqui and many others.

The synergy between the real and virtual world that has distinguished this championship from its first edition has been, once again, confirmed and even enhanced in the 2020 edition of the Porsche Esports Carrera Cup Italy. In fact, the virtual drivers need to qualify for the championship through a rigorous hot-lap selection and paired to the real drivers in order to create real virtual teams made up of 1 sim racer and 1 real driver.

In order to climb the standings it won’t be enough to rely solely and exclusively on one’s own skills, but it will be the cooperation and the sum of the results obtained by the real and virtual driver to define who will be crown as overall winner in this prestigious Esports championship. The two categories, Real and Sim, never collide directly in the 4 scheduled rounds of the championship, in fact Race 1 is dedicated to real drivers only while Race 2 is reserved to virtual drivers. An interesting change has been made also to the format of the qualifying sessione where the sum of the times recorded by the real driver and the virtual one will define the starting grid for Race 1. Race 2 will see a grid inversion of the first 6 drivers based on the results obtained by the teammate in Race 1.

The Championship will tackle on the 4 most famous italian tracks: Imola, Mugello, Vallelunga with the last round that will take place in the Temple of Speed, Monza. All the championship races will be broadcasted by Sky Italy.

At the end of the championship, the winning team of the Porsche Esports Carrera Cup Italia 2020 presented by Q8 Hi Perform and powered by AK Esports will have access to an exclusive Porsche Ice Experience in Livigno, the second ranked team will take home a Fanatec steering wheel and pedal kit while, the third team, will win one of the brand new Logitech G923 racing sim kits.

Furthermore 5 lucky drivers among the overall registered users, thanks to the Logitech G sponsorship, will have the chance to receive a pair of Logitech G gaming headsets.

During the 3 years since its first edition, the series has been subject to many format renewals always aimed to increase the challenge that any sim driver has to face to try to win the amazing prize-pool offered by the championship organisers. What really doesn’t change in this top level Esports tournament is the star of every competition: the Porsche 911 GT3 Cup 2017.