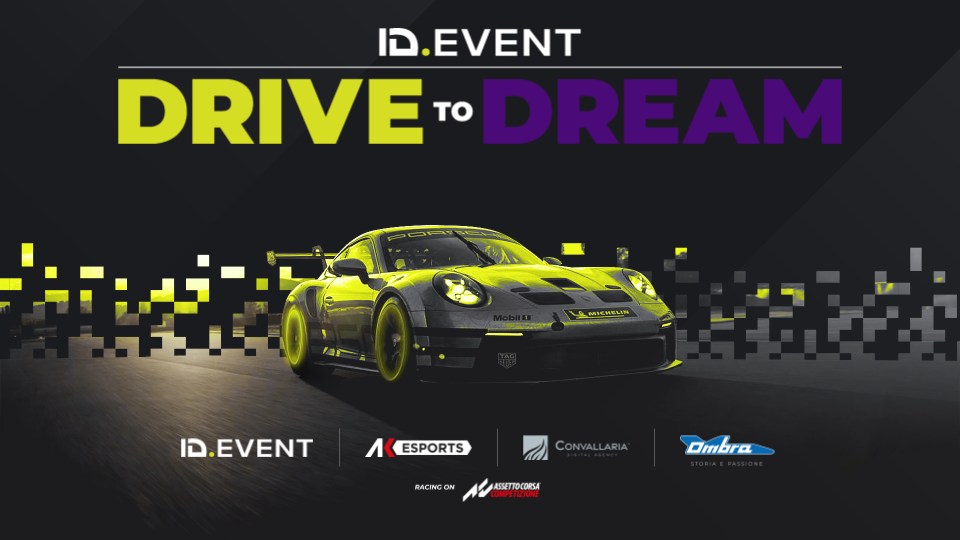 This project, with the aim of scouting among the many talents of European Esports, was born thanks to the synergy created between Identity Event, a communication agency linked to the world of motorsport, and Ak Esports.

For the first time in Europe a contest will finance the entire season to the winners, who will have the opportunity to race with a Porsche 911 GT3 in the upcoming Carrera Cup Italia 2023.

The communication of the event will be accompanied by the content creator Alberto Naska.

The benchmark car for the competition is the beautiful Porsche 911(992) GT3 Cup, both on Assetto Corsa and Assetto Corsa Competizione, where virtual competitions take place, than for selection and testing with real cars on the track. The aim of this contest is to give sim drivers who for budgetary reasons cannot enter the world of racing from karts or minor formulas as usual a chance.

The Drive to Dream format will take place in two phases, the first online with the Assetto Corsa Competizione simulator, where all participants divided into batteries, will have to compete in 2 races, one at Imola and one at Misano, in order to enter the virtual final phase.

The best 10 sim drivers from each battery, a total of 20, will advance to the second stage of Drive to Dream, which will take place at the Porsche Experience Centre in Franciacorta where with the help of two professional drivers Matteo Cairoli and Riccardo Pera, as well as the support of engineers and mechanics from the Ombra Racing team, the tests and selections on  track will take place. From these tests, the best will be selected to race the entire 2023 season in the Porsche 911 GT3 Cup for Ombra Racing team sponsored by Identity Event in the Porsche Carrera Cup Italia 2023 Championship.